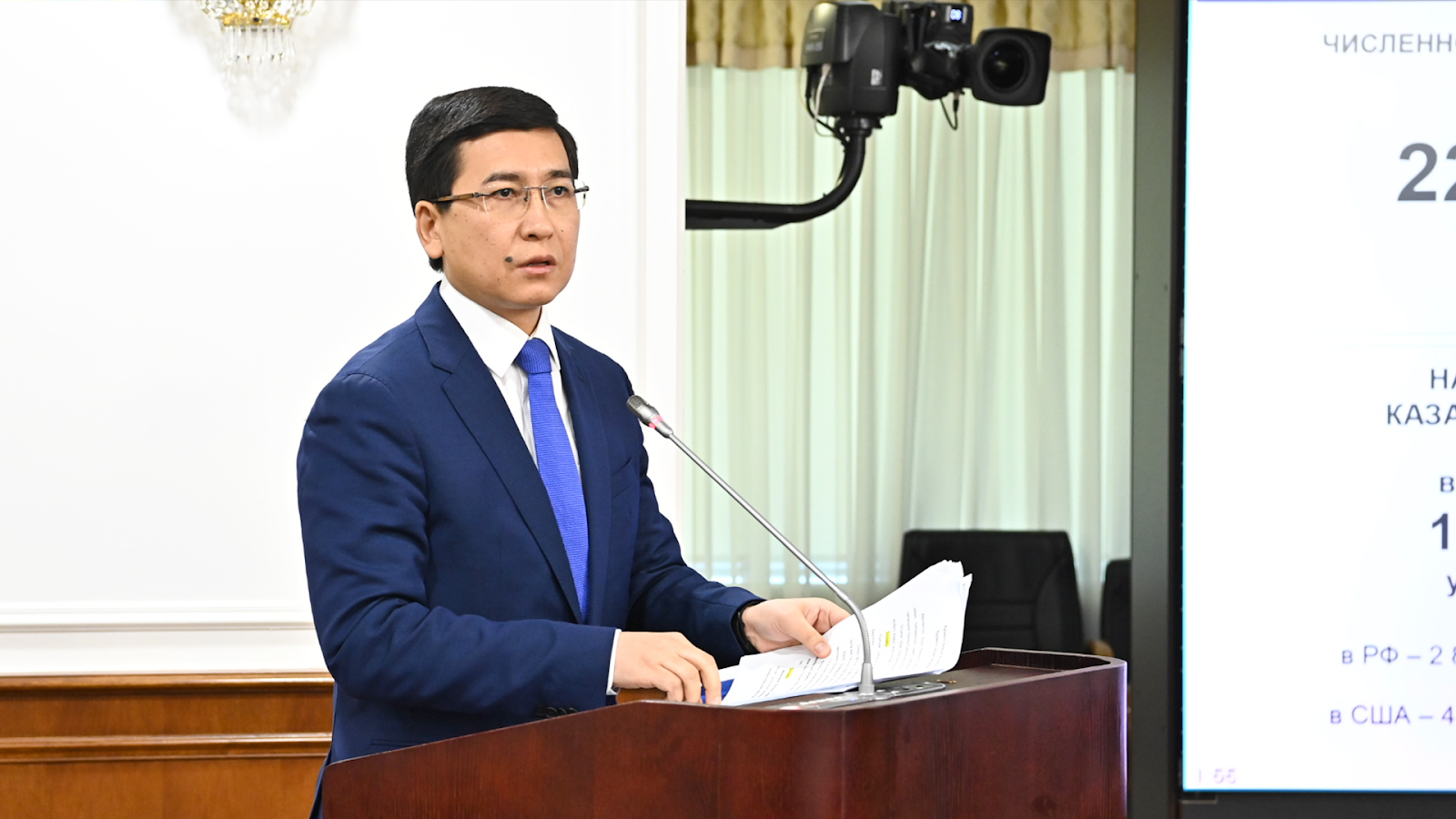 At the government session chaired by the Prime Minister of the Republic of Kazakhstan Alikhan Smailov, the issue of the development of domestic science was considered. Minister of Education and Science Askhat Aimagambetov delivered a report.

The competitiveness and future of any country directly depends on the level of development of its science, the quality of human capital. In this regard, systematic work is being carried out to develop domestic science.

“There are 22,655 scientific personnel in the country. Of these, 36% are young scientists under the age of 35. Another 39% are middle-aged, that is, they have significant potential. But if we take the total number of scientists, then there are only 1,172 scientists per one million of the country's population. This, in turn, depends on funding. World practice speaks of the need to finance science in the amount of at least 1% of GDP, and most of it should be formed from private investments,” said Minister of Education and Science Askhat Aimagambetov.

In recent years, significant changes have been made in the field of science. A special program for the development of science has been approved and provided with the necessary resources.

One of the main tasks of the Ministry of Education and Science of the Republic of Kazakhstan was to increase the scientific personnel potential until 2025, increase the number of scientists by 1.5 times, create an optimal scientific ecosystem, increase the contribution of science to the economy, link with industry and improve science management.

“One of the main repulsive factors was the salary fund. Scientists did not have a regular salary. Wages were paid only in case of victory in competitions held once every three years,” said Askhat Aimagambetov.

At the same time, institutions involved in fundamental research of the national character, that is, research related to language, literature, history, culture, philosophy, had a hard time.

Thanks to the measures taken, more than 4,000 scientists will receive stable and decent wages.

“If in 2020 the average salary of scientists, according to the Ministry of Education and Science of the Republic of Kazakhstan, was 152 thousand tenge, or 72% of the average salary in the market, then in 2022 the minimum wage started from 257 thousand tenge. To encourage scientists, since 2021, we have begun to award 50 annual awards for the ‘Best Researcher’ in the amount of 6 million tenge,” the minister said during the meeting.

According to Askhat Aimagambetov, one of the important innovations was a radical change in the system of financing science in general.

“First, the amount of funding for science has grown by 70%. Secondly, competitions used to be announced every three years, but now they are held annually. Thirdly, we introduced new types of grants — for young scientists, collaboration, short-term, individual grants. Fourthly, targeted funding was allocated only for solving specific scientific and technical problems,” said the head of the department Aimagambetov.

In addition, according to the minister, the term for funding science was extended from 3 to 5 years. As part of the reforms of the activities of the national scientific councils of the Ministry of Education and Science of the Republic of Kazakhstan, the format of their work has been completely redesigned and changed.

First, Council meetings are now open live, and decisions are made by open vote.

Second, the procedure for forming the composition of councils has been introduced. Thus, the councils included strong scientists in terms of scientometric indicators.

The Code of Ethics of the members of the Council was adopted. The Institute of the Appeal Commission has been introduced, aimed at further increasing the objectivity and validity of the decisions of the Council.

Scientists were given complete financial independence.

“Another very important initiative is that full information about the research that goes through the budget has been provided openly on the Internet. That is, the amount of allocated funds, calculations and results are now open to the public,” the Minister of Education said.

Within the framework of the “young scientist” project, the PES analysis shows that young scientists who have completed doctoral studies almost do not stay in science.

“Therefore, we began to introduce a special postdoctoral program. Now, every year, a thousand young scientists who have completed doctoral studies can attend postdoctoral studies, engage in research work and receive 500,000 tenge for 3 years. It is expected that as a result of the initiative, the scientific potential will increase annually by 1,000 young scientists with academic degrees,” said Askhat Aimagambetov.

As part of the experience exchange program for domestic scientists, a project is annually adopted for the internship of 500 Kazakh scientists in leading scientific centers of the world. Kazakh scientists and scientific experts have the opportunity to conduct scientific research together with their colleagues, work on the necessary laboratory equipment.

In 2021, 416 scientists received grants for internships at leading centers in 24 countries around the world.

During the meeting of the Government, Askhat Aimagambetov also announced the launch of a special program for the integration of scientific institutions and universities. As a result, 93 joint dissertation councils have been created, and dual training of scientific personnel is being carried out.

A new budget program has been launched to upgrade the laboratories of the institutes. Over the past two years, more than 800 units of modern equipment have been purchased. This work will continue.